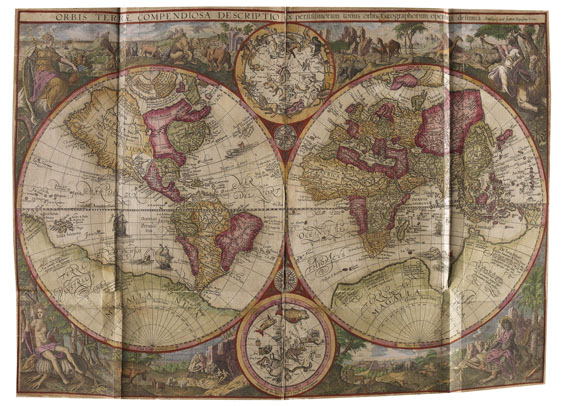 Schilder VII, 195-205 (extensive). - Sabin 41356. - Borba de Moraes I, 416ff. - Church 252. - Muller, America 2185. - Shirley 192 and 182 (map vignette by Hondius). - Tiele, Mémoire pp. 83ff. - Alden/Landis 596/63-64 (parts 3 and 4). - Cat. Nederl. Scheepvaart Mus. I, 170. - BM STC, Dutch Books p. 118. - Not in Adams and the Crone Library. - First edition . Die Itinerario (part 1) and Reys-gheschrift (part 2) additionally in first print , just as the first quire of the Beschryvinghe (title with Hondius world map in 2 hemispheres and first text l.), the following quires with features of second print, as mentioned by Tiele (this combination is contemporary and was nit usual back then).
\b
Fine copy in old coloring of this highly treasured Dutch travelogue , with valuable map material as well as splendid plates and views, of highest influence on Dutch expansion in Asia.
"This inestimable book, a treasure of all the knowledge and learning relating to the East- and West-Indies and the navigation thither, at end of the 16th century, has been in the highest esteem for nearly a century, and was given to each ship sailing to India, as log-book. Hence the many editions .. but this is also the cause that fine copies, especially with all the plates and maps, are so very rare .. A large part of the book is occupied by translations of original Spanish and Portuguese documents on geography, ethnography, statistics, navigation, etc. and also in these respects the book is of the highest importance and authority. (These important documents on navigation and many other interesting relations are simply omitted by de Bry, in their Latin and German translations!)" (Muller, America).
The 6 copper maps are of highest importance and rarity, Linschoten used Portuguese sources (mostly manuscripts), this way he made the route to East India accessible generally accessible. The world map published by Vrients, contained only in the work's first edition, was engraved by the brothers van Langren after the world map by Petrus Plancius from 1594, however, he worked over details of the Arctic Ocean and rearranged the allegoric illustrations in margins (cf. Shirley). The other maps are copies after earlier manuscript maps by Bartolomeus Lasso (1590), for which the publisher Claeszon received official printing privilege. They show South America with the Antilles; west coast of Africa; east coast of Africa with Madagascar; northern Indian Ocean with Arabia and India; as well as China and Indonesia. Plates with large plans and views of Goa and St. Helena, also with costumes, illustrations of natives, ships, plants and animals. Title vignette of Itinerario and Reys-gheschrift (rep.) with decorative illustrations of ships, corners with views of Antwerp, Amsterdam, Middelburg and Enkhuizen.
\sl216\slmult1
The geographer, merchant and explorer Jan Huyghen van Linschoten (1563-1611) traveled to Portuguese-India when he was a young man, where he had access to Portuguese sea maps, being the secretary of archbishop of Goa, Frei Vicente da Fonseca. these maps had been kept secret for over a century. "During his time in India, Jan Huyghen traveled throughout the Malabar and Coromandel coastal regions and in his spare time compiled a secret dossier on the eastern sea routes which he subsequently smuggled back to Europe" (Howgego). After the archbishop's death Linschoten left india in 1589 and returned to his hometown Enkhuizen in 1592 after he had made several stops.
Condition: 3 double page plates replaced from another copy and colored later, maps and folding plates rebacked with Japon and rei 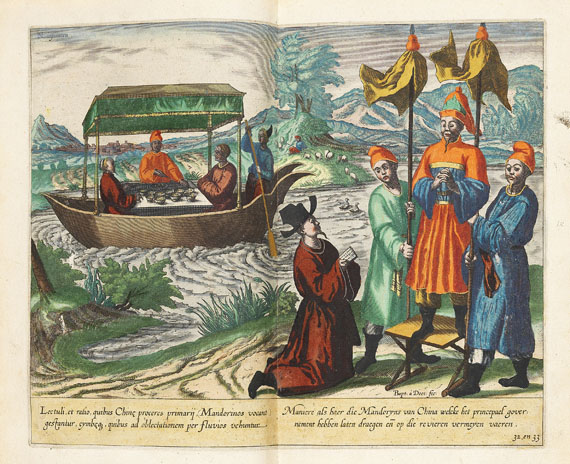 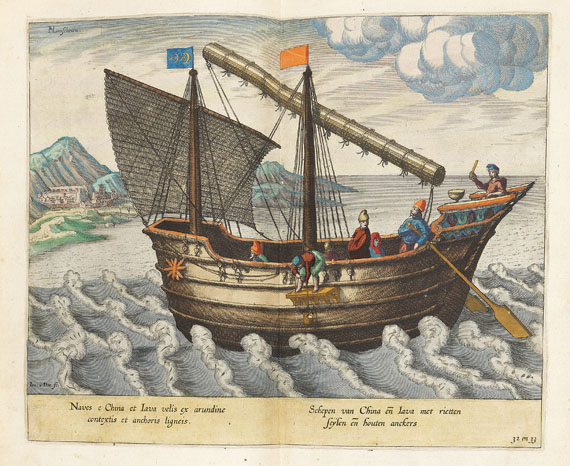 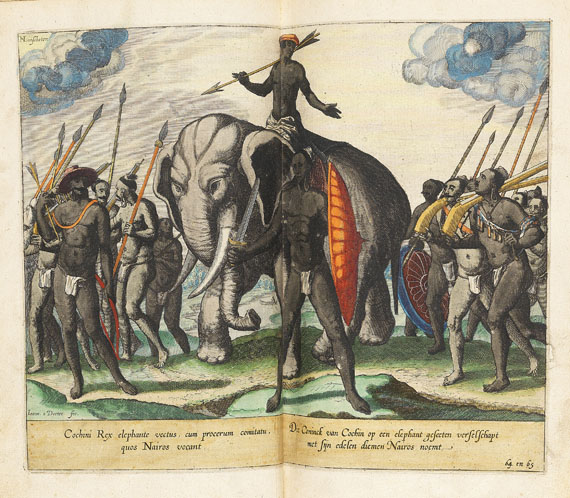 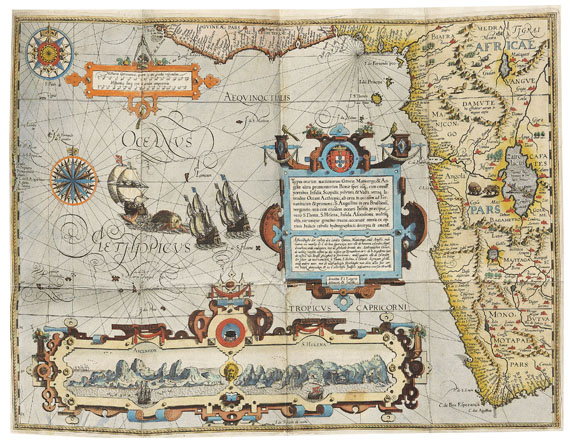 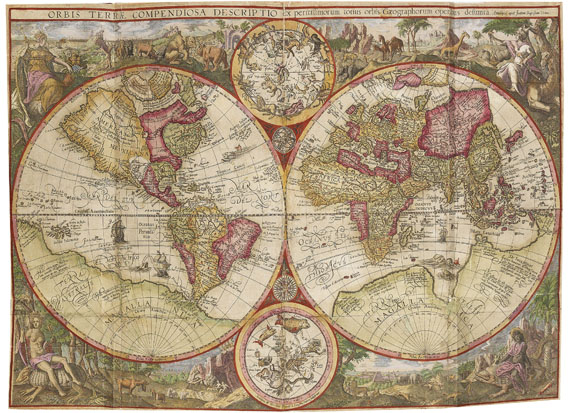 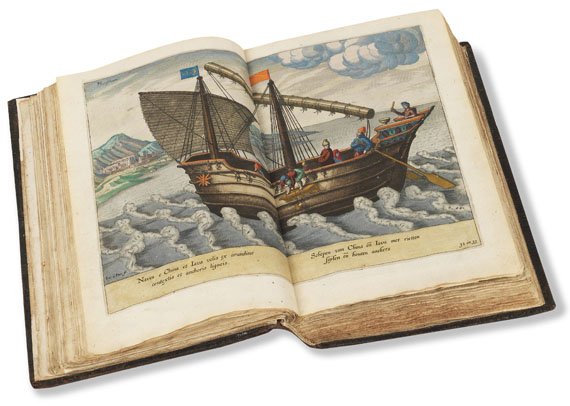