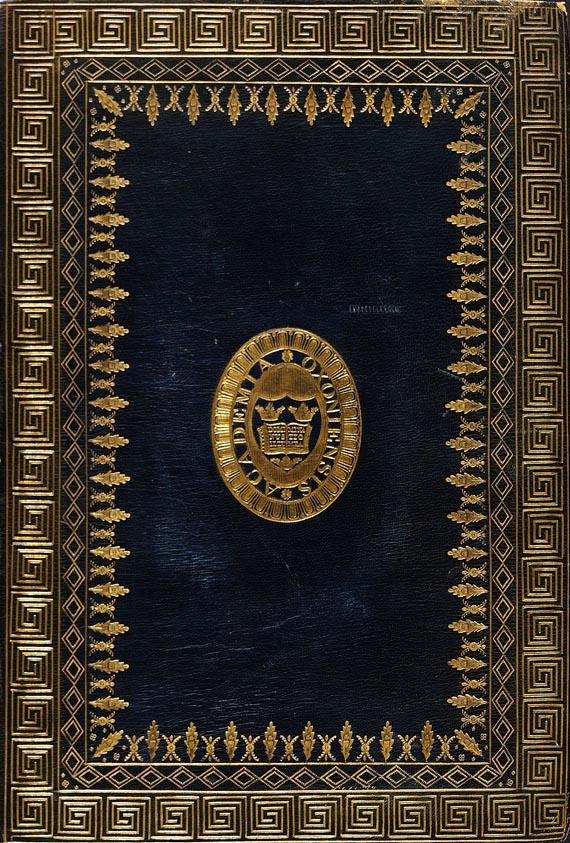 Graesse I, 214: "édition estimée". - Barker, Oxford Univ. Press 167. - Dibdin I, 323: "This is a very elegant and accurate edition, containing the commentaries of Tyrwhitt, as well as his version ... The Greek text is formed on that of Winstanley, but so carefully corrected, as to leave not a single error unnoticed ... The large paper copies of this volume form one of the most attractive ornaments of a classical collection. They are few in number, and costly in price; being reserved by the Delegates of the University Press as presents for eminent characters. I understand that 34 copies have been already distributed ... This edition has been several times reprinted at Oxford, with only three alterations, and those not important ones."

One of 30 copies of the de luxe edition on very broad-margined and strong wove paper in a contemp. treasure binding, from the library of the bishop of Durham, with his engr. armorial bookplate. Extraordinary press print after in Italian style, The Greek and Latin text printed one below another, the commentary by Tyrwhitt as appendix (as of p. 101). - According to an attached contemp. annotation, out of the initial 30 copies only some 13 remained in possession of Oxford University, "which are expressly reserved for presents hereafter to be made only on very extraordinary occasions"; the other 17 copies were given to regents and libraries, whose names were listed. Besides the kings of England, Spain and Denmark, the British Museum, the Bodleian and the Cambridge Library, several aristocrats are mentioned, among them the bishop of Durham. - On the bookbinder cf. Helwig II, 276: "Von Dibdin als ausgezeichneter Buchbinder gelobt ... Signierte Einbände u. a. im British Museum." [transl.:"Praised by Dibdin as an excellent bookbinder ... Signed bindings, among others, in the British Museum."

More Information
+
Sell
Would you like to sell a similar object?