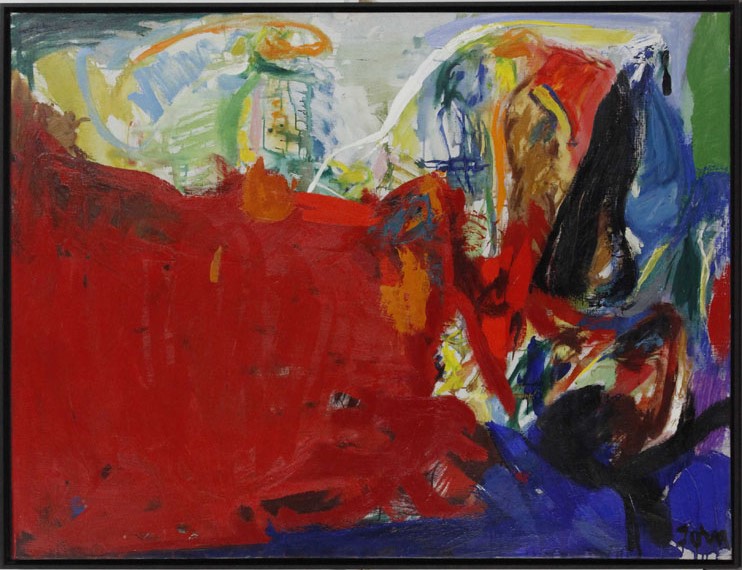 The work is registered at the Jorn Archive, Silkeborg (Museum Jorn).

In late 1966 Jorn decided to part with his long-term representing gallery Rive Gauche on good terms, he followed the advice of his good friend Jean Dubuffet and showed works at Galerie Jeanne Bucher, which had been influential since the 1930s. Jorn and the young and energetic director Jean-Francois Jaguer immediately made plans for an exhibition. At teh beginning of the new year Jorn createdone of his most powerful work groups. Next to ‘Une nouvelle vague (60 x 73 cm)‘, ‘Une mime de rien (ou prèsque)‘ (114 x 146 cm) and ‘Tête turque‘ (120 x 97 cm ) he made the opulent picture ‘Cent défauts‘ (99 x 130 cm), a true scream of colors which would become one of the paintings that Jorn showed at the first exhibition of his new gallery in April 1967. At first sight the title that Asger Jorn chose reads “100 Mistakes“, naturally, every artist with a certain degree of self-criticism will find a hundred mistakes in his work after completion. The 100 mistakes will then bring about the following 100 works, the own ones and those of others who also seek to take their painting to uncharted lands. However, taking Jorn‘s liking for wordplays into account, the phonetic variant of ‘Cent défauts‘ can be understood as “sans défauts“, meaning without mistakes or flawless, hence the postulated misery instantly turns into bright glory. The latent aggressiveness that characterizes the pictures, predominantly because of the field consisting of various shades of red, is balanced by the blank space breaking in the blue in the right lower edge and the bright tints in the picture‘s upper margin.
More Information
+
Sell
Get a free appraisal for a similar object!
+
Register for
Asger Jorn
+
Buying from A-Z
+
Contact a specialist
+
Asger Jorn Biography
Share